Clouds are made of plastic too.  Everything else seems to be.  Plastic is everywhere, and it is in clouds too.  Plastic Clouds are now known to drop a thousand tons of plastic each year on the National Parks of The Western United States alone.  To quote USA today from June 12, 2020 “Delivered like dust by the wind and rain, researchers in a new study estimate that more than 1,000 tons of tiny plastic microparticles – roughly the equivalent of 120-300 million plastic water bottles – falls upon national parks and protected wilderness areas in the western United States each year”. The Plastic Cloud has been here for a long time and we are only now starting to realize it.

It has now been proven that some plastic in the ocean breaks down into what is called microplastics.  Microplastics are tiny pieces of plastic that cannot be seen with the naked eye. Microplastics have been found on every point on the earth: Mt. Everest, Antarctica, national parks in every country, in the guts of tiny creatures in the deepest depths of the ocean, in the guts of worms that only live underground in Antarctica, fresh natural water sources (streams and rivers), and in rain.   Yes, rain.  Think of that.  Plastic waste from the ocean is in the rain, the rain that cools you off on a sunny day, the rain that waters crops, lawns, and forests.  The rain that starts as rain and then turns into the snowflake that you catch on your tongue.

The rain that makes the snowpack and supplies the freshwater for municipal water systems has microplastics in it.  That means microplastics are in your drinking water from any source, faucet, bottled water… everything.  When you take a shower you are showering in plastic.  All the animals either domestic, wild, raised as feed or food are all eating and drinking plastic that becomes part of their flesh.

The origin of rain is fascinating – yet I’m a bit of a geek admittedly.  The concept of a tiny water droplet warming to the point that some natural lifting mechanism in our environment causes that tiny droplet of water to float high in the sky and combine with trillions of other tiny water droplets and form a cloud is simply incredible.  The cloud moves over the ocean and continues to capture more water droplets like some sort of natural magnetic traction beam continually lifting water droplets into itself.  Eventually the water droplets in aggregate get heavy enough to fall out, making rain.

Clouds travel thousands of miles and rain falls out of them when it is ready to.   These raindrops contain plastic and thus deposit microscopic droplets everywhere there is rain.  Everywhere.

The questions: How does plastic in water droplets affect that water droplet and it’s lifecycle?  Does the weight or mass of the plastic cause a water droplet to contain fewer water molecules in order to compensate for space and weight consumed by the plastic?  How does that extra weight, either positive or negative, compare to a normal water droplet’s weight and effect on evaporation? Can a certain size water droplet that couldn’t be lifted before now be lifted?  Do rain clouds hold more or less actual water as they accommodate plastic? Do clouds move differently because of the plastic that is in them? Are weather forecast models less accurate than before 1980, even by just a little bit?

It’s possible that plastic in water droplets could create a new kind of cloud, The Plastic Cloud. The Plastic Cloud may look different, move different, function differently at different altitudes. Or it may look the same but function differently because of its plastic content,  There are many more questions than answers but the data so far is real. Plastic is everywhere. Plastic is in the water you drink from municipal water supplies or bottled water, you can’t escape it. Plastic is in your food, you can’t escape it. Some estimates state that we each eat about 7 pounds of plastic each year due to plastic in food that we would never expect. The effects of plastic on our bodies and physiological makeup are terrifying.  The toxins that continually leach from plastic of any size contain compounds that mimic human hormones. The amount of these compounds released in our bodies from even the smallest plastic particles cause our bodies to react as if the hormones have entered our bodies at a rate thousands of times larger than any normal does.  Simply touching a standard receipt will release estrogen in your body at a rate hundreds of times greater than normal. What does this do to our bodies?  Other than recording that the increased hormone event occurred, it is unknown what ramifications will result. I suggest that extremely large amounts of hormones introduced into our bodies, by surprise and unplanned, is extremely dangerous. The quantification of ailments that are today’s norm but didn’t exist in the 1950s seems a daunting task.  However, they may one day be linked to The Plastic Cloud. 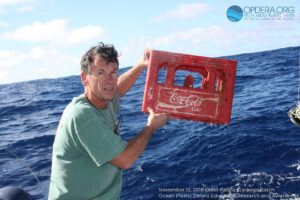 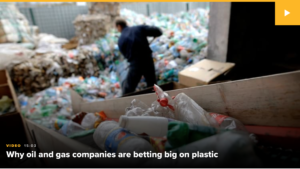